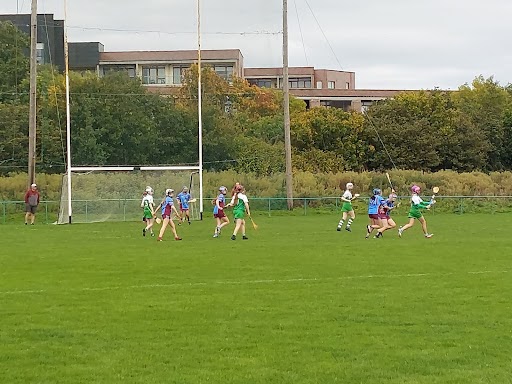 This Sunday at 1.30pm on the Adult field in the Club our under 14 camogie
team will play the Division 4 Championship Final.

The team and all involved are asking everyone in the club to come around at
1.15pm (before throw in) and cheer them on. This will be a nice start to
everyone’s day before getting dressed up and going a bit loopy for
Halloween.

Before making up your mind *not *to come around and to cut the grass
instead, you should give some thought to the following:

– This team has been driving on the camogie section for seven years.
Before them, there had not been a camogie team at juvenile level for over
25 years.
– There are currently three camogie teams in the club (soon to be 4 when
the u9s get going in 2022). This is down to this team’s leadership
and their willingness to keep playing (even when they were getting
slaughtered in the first couple of years).
– The team trains harder than any other team in the club. Their normal
week is
– Tuesday Camogie 6.15pm to 7pm ; Football 7pm to 8pm
– Wednesday Camogie 6.15pm to 7.15pm
– Thursday Puck around 6.15pm to 7pm; Football 7pm to 8pm
– Saturday Football game.
– Sunday Camogie game.
– This team’s “WANT” and “ENERGY” is amazing. If it could be bottled and
sold, the club would be loaded.
– One ref recently commented after one of their games that the game was
“the best he had refereed that month”. (He was including adult hurling and
football)

On Sunday, the final is against St Kevin’s and going on recent meetings,
this match is going to be a tight affair. Since February 2020, the two
teams have played four times. It currently stands two wins each. The
winning margin on every occasion was a single score. Kevins, like
ourselves, are a great club working hard in their local community and we
wish them the best on Sunday even though we don’t want them to win ;).

SO MAKE UP YOUR MIND NOW; BE A LARRIER AND SUPPORT THESE WARRIORS ON
SUNDAY. SAY IT TO OTHER LARRIERS; SPREAD WORD.